While looking for evidence around the doubling time of neural implants for quadriplegics....

....I found reports on the total worldwide count of cochlear implants.
The trend for cochlear implants worldwide is not only exponentially increasing - but accelerating.  The doubling time has increased from every five years to every two years now. 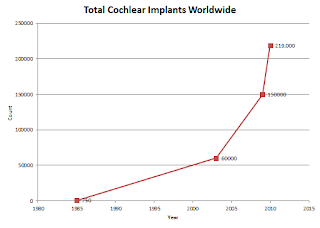 Depending upon when this curve turns sigmoidal and the degree of commoditization of components creating affordability in the developing world, nearly every person worldwide who is deaf (6.6M) could potentially have an implant within the next 12 years. 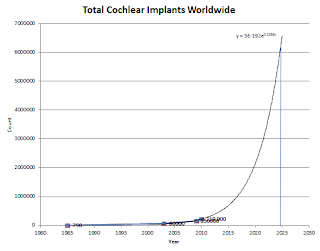 A plot of cochlear device fidelity might also give a hint as to what year implants could exceed the volume range or fidelity of the human ear.
Perhaps the Six Million Dollar Man is closer than most thought.
Posted by Test at 5:00 AM 1 comment:

*Nifty piece here. Ties in so obviously with other surveillance and warfare practices. Instead of breeding weeds to resist herbicides we'll breeding them to become robot-camouflaged. Soon, New Aesthetic weeds of all kinds. http://www.treehugger.com/sustainable-agriculture/star-wars-weeds-could-lasers-replace-herbicides.html The Leibniz team has worked to determine the optimum laser intensity to kill the weeds rather than encourage growth. The second ...

Sent from my mobile
Posted by Test at 5:20 AM No comments:

And just on the tail of the announcement of monkeys moving their temporarily paralyzed arms using thoughts - a woman moved a robotic arm purely with her thoughts - feeding herself for the first time in 15 years.


> http://www.washingtonpost.com/national/health-science/paralyzed-woman-moves-robotic-arm-with-her-thoughts/2012/05/16/gIQAd52hUU_story.html?tid=pm_pop
Posted by Test at 2:16 PM No comments:

Brain computer typewriters with only surface electronics appear closer than ever.
"...The NIST sensor measured magnetic signals of about 1 picotesla (trillionths of a tesla). For comparison, the Earth's magnetic field is 50 million times stronger (at 50 millionths of a tesla)..."
Imagine a string of these embedded in the arms of a pair of glasses.  Given the proximity to Wernicke's and Broca's speech forming areas - could they be sensitive enough to pick up mere thoughts of speech or sub-auditory vocalizations? A miniature atom-based magnetic sensor developed by the National Institute of Standards and Technology (NIST) that operates at room temperature has set a new record in miniaturization of magnetic measurements of the brain.

The measurements were verified by comparing them with signals recorded by a SQUID (superconducting quantum interference device). SQUIDs are the world's most sensitive commercially available magnetometers for biomedical applications such as studying mental processes and advancing the understanding of neurological diseases.

NIST and German scientists used the NIST sensor to measure alpha waves in the brain associated with a person opening and closing their eyes as well as signals resulting from stimulation of the hand.

The NIST mini-sensor is slightly less sensitive than a SQUID now but has the potential for comparable performance while offering potential advantages in size, portability and cost. It consists of a container of about 100 billion rubidium atoms in a gas, a low-power infrared laser and fiber optics for detecting the light signals that register magnetic field strength — the atoms absorb more light as the magnetic field increases. The study results indicate the NIST mini-sensor may be useful in magnetoencephalography (MEG), a noninvasive procedure that measures the magnetic fields produced by electrical activity in the brain.

MEG is used for basic research on perceptual and cognitive processes in healthy subjects as well as screening of visual perception in newborns and mapping brain activity prior to surgery to remove tumors or treat epilepsy. MEG also might be useful in brain-computer interfaces.

In contrast, the chip-scale NIST sensor is about the size of a sugar cube and operates at room temperature, so it might enable lightweight and flexible MEG helmets. It also would be less expensive to mass produce than typical atomic magnetometers, which are larger and more difficult to fabricate and assemble.

"We're focusing on making the sensors small, getting them close to the signal source, and making them manufacturable and ultimately low in cost," says NIST co-author Svenja Knappe. "By making an inexpensive system you could have one in every hospital to test for traumatic brain injuries and one for every football team."

The sensor has been improved since it was used to measure human heart activity in 2010. NIST scientists redesigned the heaters that vaporize the atoms and switched to a different type of optical fiber to enhance signal clarity. Measurement positions used to detect MEG signals. Activity around 10 Hz linked to closing and opening of the eyes was measured with the sensor positioned above O1; signals related to electrical stimulation at the wrist were obtained over position C3. (Credit: T.H. Sander et al./Biomedical Optics Express)

The brain experiments were carried out in a magnetically shielded facility at the Physikalisch Technische Bundesanstalt (PTB) in Berlin, Germany, which has an ongoing program in biomagnetic imaging using human subjects.

Calculations suggest an enhanced sensor could match the sensitivity of SQUIDS. NIST scientists are also working on a preliminary multi-sensor magnetic imaging system prior to testing clinically relevant applications.

Sent from my iPad
Posted by Test at 1:31 AM No comments:

What do you think - 5 years away from the first trials in humans?This is the most promising development I have seen yet for spinal injury victims.  They won't be able to feel anything yet - but at least this could likely delay the crippling muscle atrophy and contractures thus biding some time until the next breakthrough.  I am only sad Christopher Reeves missed it. A new neuroprosthetic enables monkeys with one temporarily paralyzed hand to grasp a ball and put it in a chute (right). (Credit: C. Ethier et al./Nature)

An artificial connection between the brain and muscles can restore complex hand movements in monkeys following paralysis, Northwestern University researchers found in an NIH-funded study.

They combined two pieces of technology to create a neuroprosthesis (a device that replaces lost or impaired nervous system function):

The research team was led by Lee E. Miller, Ph.D., professor of physiology at Northwestern University's Feinberg School of Medicine in Chicago. The team recorded the brain and muscle activity of two healthy monkeys as the animals performed a task requiring them to reach out, grasp a ball, and release it.

The FES device then created the required patterns of muscle activity predicted by the brain activity.

The researchers gave monkeys an anesthetic to locally block nerve activity at the elbow, causing temporary paralysis of the hand. With the aid of the neuroprosthesis, both monkeys regained movement in the paralyzed hand, could pick up and move the ball in a nearly routine manner and complete the task as before.

The next steps include testing this system in primate models of long-term paralysis and studying how the brain changes as it continues to use this neuroprosthesis.

Crowdsourced Pathology, Thanks to Video Gamers

This study suggests that pathology diagnosis could be made available across the developing world at virtually the same quality of the developed world for virtually negligible cost by using crowdsourcing.


Crowdsourced Pathology, Thanks to Video Gamers

Researchers from UCLA's School of Engineering and Applied Science and the School of Medicine have designed a system that can harness distant groups of people to analyze pathology images for signs of disease. They tested the ability of non-professionals to quickly learn to detect malaria when looking at images of red blood cells and have shown that if necessary, with a bit of help from online crowds, large groups of people can potentially be screened for the disease.
The system they built relies on video gaming to attract people to do the visual tasks necessary to spot malaria.  The study subjects, mostly untrained newbie undergrads, showed a spotting ability that was within 1.25 percent of medical professionals.
Read More


Sent from my mobile